The (deadly) risks of taking your eyes off the road 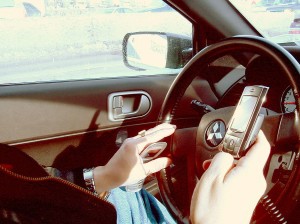 We all know that we shouldn’t do it, but at one point or another most of us are guilty of using our cellphones while driving. Although there is a complete, legal ban on the use of cellphones while operating a motor vehicle in Ontario, the threat of a fine does not appear to be enough to discourage drivers – in Ontario and across the nation – from engaging in this risky behaviour.

In her recent Globe and Mail article, Jessica Leeder reports that “distraction – caused by texting, smartphones and other forces that draw drivers’ attention off the road – is eclipsing impaired driving as the leading cause of crashes and fatalities in many jurisdictions across Canada and the United States.”

“With the proliferation of technology, it’s hard to say what … this is going to lead to,” said Nova Scotia RCMP Constable Mark Skinner. “We know it’s a problem already. Will the problem continue to get worse?”

Although drivers of all ages are guilty of engaging in this behaviour, teens are reportedly the highest risk group. A 2013 study commissioned by the Ford Motor Co. of Canada reported the following alarming statistics: